THERE ARE NO NEW SCRIPTURES AFTER THE BOOK OF REVELATION.

The Book of Revelation ends (Revelation 22:18-19) with a very strong warning from God.  Do not add nor take away from the Book of Revelation!  Since Islam is the only major religion with a new text (the Quran) appearing after the resurrection of Jesus, this warning must be directed at Islam.  This makes sense, since most of the Revelation prophecy is a warning about the coming of Islam and the false prophet Mohammad.

Rev 22:18 I warn everyone who hears the words of the prophecy of this scroll: If anyone adds anything to them, God will add to that person the plagues described in this scroll.

Rev 22:19 And if anyone takes words away from this scroll of prophecy, God will take away from that person any share in the tree of life and in the Holy City, which are described in this scroll.

A solemn warning on the book of Revelation!  Do not add anything to the text, nor take anything away from the text.

Islam claims the Qur’an is the “final revelation” from God.  The Qur’an adds and it also takes away!  The closing chapter of the Book of Revelation makes clear there is no more Scripture after this.  The Qur’an is a false story of Jesus—just a messenger and not the resurrected Son of God.  The Qur’an takes away the atoning sacrifice of Jesus; it takes away the only path to God.  It adds text proclaiming the virtues of the false prophet Mohammad and directs all prayer to the image of the beast.  It adds text to worship the “we” in Islam, the dragon and the beast.  Revelation warns about all this!

Anyone who believes what the Qur’an has taken away from Jesus concerning the truth of His resurrection; that Jesus is the Son of God, and His atoning sacrifice will face the wrath of God:  “God will take away from that person any share in the tree of life and in the Holy City, which are described in this scroll.”

Anyone who believes what the Qur’an has added about worship to the image of the beast (praying to the Kaaba) will face the wrath of God:  “If anyone adds anything to them, God will add to that person the plagues described in this scroll.” 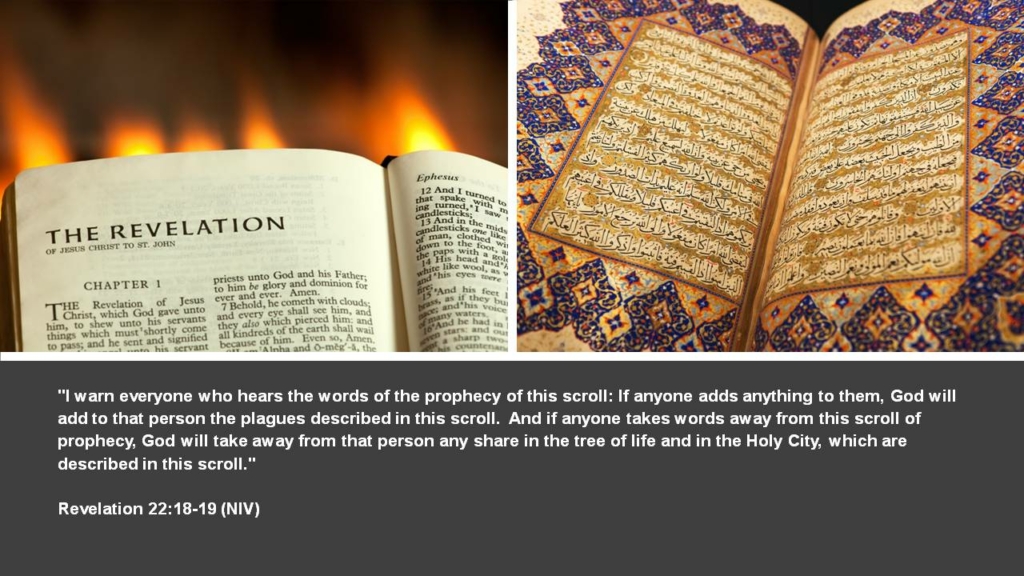