Islam must worship as a congregation and pray to the false god at the same time Jesus was crucified.  Islam Friday prayer Jesus crucified at the Friday mosque service cannot be a coincidence.

Christians celebrate the resurrection of Jesus on Sunday.  Jesus is returning soon.  Learn the truth of Jesus!

Did Satan instruct Muslims to gather at the mosque and pray to the image of the beast (the Kaaba) every Friday afternoon at the time of Jesus’s death?

The full article on Satan fighting with the Son of God and demanding Friday worship is here:

Christians celebrate the risen Christ on Sunday mornings.  This is because the Bible tells us Jesus arose in the morning of the first day of the week (Sunday).

Luke 24:1-7 (NIV)1 On the first day of the week, very early in the morning, the women took the spices they had prepared and went to the tomb. 2 They found the stone rolled away from the tomb, 3 but when they entered, they did not find the body of the Lord Jesus. 4 While they were wondering about this, suddenly two men in clothes that gleamed like lightning stood beside them. 5 In their fright the women bowed down with their faces to the ground, but the men said to them, “Why do you look for the living among the dead? 6 He is not here; he has risen! Remember how he told you, while he was still with you in Galilee: 7 ‘The Son of Man must be delivered over to the hands of sinners, be crucified and on the third day be raised again.’” 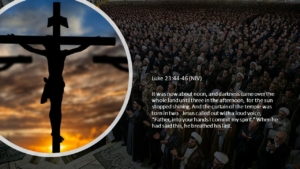 In contrast Muslims must pray on Friday afternoon.  Islam Friday prayer when Jesus was crucified overlap. The Bible tells us Jesus died around three in the afternoon on a Friday.

Luke 23:44-46 (NIV)
44 It was now about noon, and darkness came over the whole land until three in the afternoon, 45 for the sun stopped shining. And the curtain of the temple was torn in two. 46 Jesus called out with a loud voice, “Father, into your hands I commit my spirit.” When he had said this, he breathed his last.

The Qur’an (62:9-10) invokes the importance of Friday afternoon as a sacred day of worship in a chapter called “Al-Jumah,” meaning the day of congregation, which is also the word for Friday in Arabic.

Directly before this prayer, worshippers listen to a lecture delivered by the Imam or another religious leader from the community. This lecture reminds listeners about Allah, and usually directly addresses issues facing the Muslim community at the time.

Friday prayer is one of the most strongly emphasized duties in Islam. The Prophet Mohammad, peace be upon him, even said that a Muslim man who misses three Friday prayers in a row, without a valid reason, strays from the straight path and risks becoming a disbeliever. The Prophet Mohammad also told his followers that “the five daily prayers, and from one Friday prayer until the next, serves as an expiation for whatever sins have been committed between them, provided one does not commit any major sin.”

Qur’an 62:9
O you who have believed, when the adhan is called for the prayer on the day of Jumu’ah [Friday], then proceed to the remembrance of Allah and leave trade. That is better for you, if you only knew.

Qur’an 62:10
O you who have believed And when the prayer has been concluded, disperse within the land and seek from the bounty of Allah, and remember Allah often that you may succeed.

The false prophet Mohammad spoke of the value of praying in congregation rather than individually, promising spiritual rewards, such as answered prayers and forgiveness for one’s sins. Attending Friday prayers, Mohammad said, is equivalent to one entire year of praying and fasting alone.

The Prophet said: “The prayer in congregation is superior to the prayer performed individually by twenty-seven degrees.” [Al-Bukhari and Muslim]

Satan was integral in the betrayal, arrest, torture, and execution of Jesus.  During Jesus’ final meal with his disciples, Satan entered into Judas to betray Jesus.  This means Islam Friday prayer overlapping when Jesus was crucified at the Friday mosque service cannot be a coincidence.

John 13:2 (NIV)
The evening meal was in progress, and the devil had already prompted Judas, the son of Simon Iscariot, to betray Jesus.

Luke 22:3-6 (NIV)
Then Satan entered Judas, called Iscariot, one of the Twelve. And Judas went to the chief priests and the officers of the temple guard and discussed with them how he might betray Jesus. They were delighted and agreed to give him money. He consented, and watched for an opportunity to hand Jesus over to them when no crowd was present. 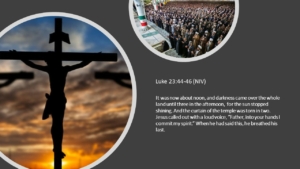 Satan celebrates the death of Jesus with prayer directed to the image of the beast (the Kaaba) at the same time Jesus died on a Friday afternoon.