Home/Beast of Revelation, Mark of the Beast, Monthly/Revelation Woman Defeats Islam
Previous Next

THE REVELATION WOMAN DEFEATS ISLAM AND STANDS WITH THE ISLAMIC MOON UNDER HER FEET.

THE GOSPEL OF JESUS DEFEATS THE QUR’AN.

Why is the Woman of Revelation Standing with the Moon Under Her Feet?  Jesus Defeats the Dragon and the Beast–Their Symbol is the Moon.

Revelation 12:1 (NIV)
A great sign appeared in heaven: a woman clothed with the sun, with the moon under her feet and a crown of twelve stars on her head.

The Revelation Woman defeats Islam with the Gospel light from Jesus.  She is “clothed with the sun”, covered perfectly with the rays of Jesus Christ, the light of the world.

“With the moon was under her feet”; the New Covenant light from Jesus is superior to the feeble lunar light; the false teaching of Mohammad and his crescent moon.

“A crown of twelve stars on her head”; the doctrine of the Gospel, preached by the twelve apostles and to the twelve tribes, is a crown of glory to all true believers.

The full commentary on Revelation chapter 12 is here:

Some commentators have speculated the symbol of the moon under her feet is a triumph over the ancient Jewish lunar festivals, and obsolete temple sacrifices. But Revelation is a detailed warning about Islam. The universal symbol of Islam is the crescent moon. Jesus and the Church triumph over Baal and the Islamic false teaching in the Qur’an, and the woman stands in a superior position over the moon.

The universal display of the crescent moon sign on the top of every mosque is not for decoration; it is an ancient false worship to Baal. Muslims have maintained the crescent symbol from Mohammad’s era until this day. Do Muslims worship the moon? Muslims would say “No”, but why must they honor the crescent shape of the moon, not the full moon? They have been deceived to honor Baal who dwells in the Kaaba, the image of the beast.

The Allah of the Qur’an (Satan the dragon) denies Jesus is the Son of God, denies the crucifixion, and denies the resurrection of Jesus. The Qur’an’s purpose is to take away the atoning sacrifice of Jesus. 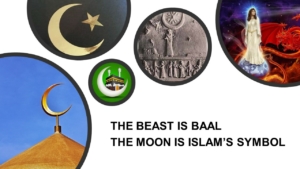