Ten nation Babylon empire reforming around Israel today.  Iraq, Turkey, Syria and Iran are reforming the Babylon and Persian Islamic Empire.  This is a sure sign Jesus is returning soon. Jesus is the only path to heaven.  Every other way will fail. No one knows the day, but Jesus will return.  Jesus is the Son of God.

Video on the ten nation empire is here:

The Bible in Revelation, Ezekiel and Daniel tells us a Babylon and Persia led (Islamic) 10 nation confederacy will invade and attempt to destroy Israel in the end times.  Bible prophecy tells us the invading armies are only defeated by the return of Christ.

Babylon is Iraq and Syria, and Persia is Iran.

Both President Bush and President Obama have increased the speed of the Babylon and Persian Islamic Empire appearance.  Babylon is reforming today out of Shia groups that will replace ISIS when ISIS is defeated in Iraq and Syria. The formation of Babylon was partially caused with the Iraq invasion under Mr. Bush, and Persia was greatly strengthened under the Iran Nuclear Deal under Mr. Obama and John Kerry. 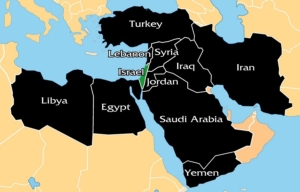 God tells us about this final future invasion of Israel in Ezekiel chapters 38 and 39, and also in Daniel and Revelation.

This invasion will only occur after the Jewish remnant returns to Israel in 1948, and they have prospered, and live in peace.  Persia (Iran) will lead this invasion, along with other Islamic countries such as Put, which is Libya today, and Cush which is the Arabian Peninsula today.

3 ‘This is what the Sovereign Lord says: I am against you, Gog, chief prince of Meshek and Tubal. 4 I will turn you around, put hooks in your jaws and bring you out with your whole army—your horses, your horsemen fully armed, and a great horde with large and small shields, all of them brandishing their swords.

8 In future years you will invade a land that has recovered from war, whose people were gathered from many nations to the mountains of Israel, which had long been desolate. They had been brought out from the nations, and now all of them live in safety. 9 You and all your troops and the many nations with you will go up, advancing like a storm; you will be like a cloud covering the land.

Did Misinterpretation of Ezekiel 38 Start the Iraq War?

In a 2003 interview, Jacques Chirac, President of France at that time, affirmed that President George W. Bush asked him to send troops to Iraq to stop Gog and Magog, the “Bible’s satanic agents of the Apocalypse.”  According to Chirac, the American leader appealed to their “common faith” (Christianity) and told him: “Gog and Magog are at work in the Middle East.  The biblical prophecies are being fulfilled.  This confrontation is willed by God, who wants to use this conflict to erase his people’s enemies before a New Age begins.”

President Bush misinterpreted “Gog” and Magog” to be connected somehow with Iraq. The most likely explanation is that “Gog” is the Islamic Man of Lawlessness and leader of the 10 nation Babylon-Persian confederacy (“people of Magog”) to invade Israel in the end times.

But it was incorrect to assume this meant Saddam Hussein in Iraq in 2003 and, most importantly, that the final battle as prophesied by Ezekiel some 2,600 years ago could be averted by the American led invasion.  In actuality, the American invasion actually helped make this Persian led invasion more likely.

The United States invaded Iraq in 2003 with good intentions.  America stated that the intent was to remove “a regime that developed and used weapons of mass destruction, harbored and supported terrorists, committed outrageous human rights abuses, and defied the just demands of the United Nations and the world.”  However the long term outcome was much different and a renewed Babylon (Iraq-Syria) is emerging from the ruins and closely tied to Persia (Iran).

Here are links to more detailed articles on Babylon, Persia and the invasion:

How the US Invasion of Iraq Helped Create Babylon

Also see the videos on our lessons page:

Our website Revelation-Now.org spreads the end times Gospel message to Christians and Muslims.

The website is designed to meet three goals:
1. Help Muslims see God’s true Scripture of Jesus and forgiveness.
2. Understand Bible prophecy as it relates to Islam and Christian truths.
3. Prepare for the end times and the soon return of Christ.