The Koran Does Not Give the Truth

Only the Gospel of Jesus Is the Way 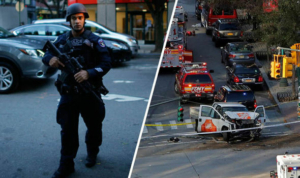 and 11 seriously injured and hospitalized by a Muslim man from Uzbekistan driving a rented truck over bicycle riders and people walking.  When he got out of the truck he yelled “Allah Akbar”–meaning “God (only the unitary Islamic God of the Koran) is Great.”

To understand the spiritual war going on today, we must first realize we are living in the last days.

These are the times of desperate demonic apostasy (1 Timothy 4:1, “But the Spirit explicitly says that in later times some will fall away from the faith, paying attention to deceitful spirits and doctrines of demons”, and 2 Peter 2:1, “But false prophets also arose among the people, just as there will also be false teachers among you, who will secretly introduce destructive heresies, even denying the Master who bought them, bringing swift destruction upon themselves.”)

While many in the West think Islam means “Terrorism”, Islam really first and foremost stands for “Tawheed.”  Tawheed is about the desperate fight for the oneness of Allah.  Allah has no partners and no Son.  Allah has no children.  We see this throughout the Koran.

Compare the Bible to the Koran here:

The extreme fear in the Koran revelation giver (Satan)–desperate to be worshipped, desperate to make Jesus into something other than God (Tawheed), desperate to deny the crucifixion, desperate that Jesus not be the risen Messiah.  The Koran is a document of desperation.  But it deceives 1/3 of the world!

To understand this deception from Satan, all we have to do is read the letter to the United States from Osama Bin Laden written a year or so after the September 11 attacks.  What did Osama Bin Laden want?  He tells us clearly what he wants.

1. The first thing Bin Laden wanted was mass U.S. conversion to Islam.  He tells us to not associate any partners with Allah.  (This is Tawheed–meaning there is no Holy Spirit and Jesus is not God.)
2. Bin Laden claims only the Koran is true and the Gospel was corrupted.
3. Finally, he wants to stop American support for Israel.

The Holy Spirit Has Enabled the Message to Be Heard

The Bible warned about the Image and the mark.  We can see these today and teh video below explains them.