Jesus Will Return When Jews Say “Blessed Is He”

Home/Monthly, Prophetic Current Events, Trust in Jesus/Jesus Will Return When Jews Say “Blessed Is He”
Previous Next

Jesus Will Return When Jews Say “Blessed Is He”

“Blessed is He Who Comes in the Name of the Lord”

Jesus said prepare for His return, you do not know the hour.  It will surprise you.  But Jesus also did say we would recognize the season.  One sure sign of the season is the outpouring of the Spirit into the Jewish remnant. 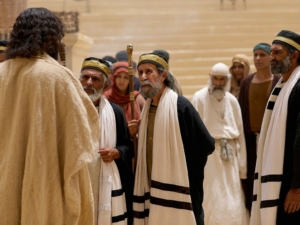 Shortly before his crucifixion and resurrection, Jesus warned the Pharisees and other Jewish leaders in Jerusalem that they would not see him again until the phrase “Baruch haba B’Shem Adonai” is said by Jews who recognize finally Jesus is the Messiah.  Today many Jews say this phrase!

Matthew 23:37-39 (NIV)
“Jerusalem, Jerusalem, you who kill the prophets and stone those sent to you, how often I have longed to gather your children together, as a hengathers her chicks under her wings, and you were not willing. Look, your house is left to you desolate. For I tell you, you will not see me againuntil you say, ‘Blessed is he who comes in the name of the Lord.’”

Jesus was teaching the Pharisees a prophecy given in Psalm 118.

Psalm 118:26 (NIV)
Blessed is he who comes in the name of the Lord. From the house of the Lord we bless you.

Today, in the last days, it is simply astonishing to see the large number of Jewish people coming to faith in Yeshua all over the world (a miracle of fulfilled prophecy). Today it is estimated there are some 325,000 Messianic Jews in the world with an estimated 80,000 living in Israel.  There are more Jews today who believe in Jesus than at any other time since the first century in the book of Acts.

For example, just through the ministry of Jewish Voice alone, some 75,000 Jewish people have responded to the Gospel in the last decade.  Other groups, such as Jews for Jesus, Chosen People Ministries, and Friends of Israel have reached many tens of thousands of Jewish people with the truth of the Gospel.

Since 1948, and particularly since the liberation of Jerusalem in 1967, hundreds of thousands of Jewish people around the world have accepted Jesus as the Messiah.  This movement really took off as Israel’s towns were rebuilt after 1967 for they had long been desolate. Ezekiel and Zechariah gave prophecy about this end times event.

Ezekiel 36: 33-36 (NIV)
“This is what the Sovereign Lord says: On the day I cleanse you from all your sins, I will resettle your towns, and the ruins will be rebuilt. The desolate land will be cultivated instead of lying desolate in the sight of all who pass through it.

They will say, “This land that was laid waste has become like the garden of Eden; the cities that were lying in ruins, desolate and destroyed, are now fortified and inhabited.”  Then the nations around you that remain will know that I the Lord have rebuilt what was destroyed and have replanted what was desolate. I the Lord have spoken, and I will do it.”

Zechariah 12:10 (NIV)
“And I will pour out on the house of David and the inhabitants of Jerusalem a spirit of grace and supplication. They will look on me, the one they have pierced, and they will mourn for him as one mourns for an only child, and grieve bitterly for him as one grieves for a firstborn son.”

Paul mentions this in Romans 9:27-28.  “Though the number of the Israelites be like the sand by the sea, only the remnant will be saved.  For the Lord will carry out his sentence on earth with speed and finality.”

The Jews took the Gospel to the Gentiles, and eventually the Church became almost entirely Gentile and unrecognizable to the Jewish People.  However, we are living in a time of Jewish revival!  All around us, there are signs that the world is being made ready for Messiah’s return.  The most important of these, as we have seen, is the restoration of the People of Israel to a right relationship with God.