The Crucifixion Date of Jesus was April 3, 33 AD

Home/Listen to Jesus, Monthly, Trust in Jesus/The Crucifixion Date of Jesus was April 3, 33 AD
Previous Next

The Crucifixion Date of Jesus was April 3, 33 AD

When was the Crucifixion of Jesus and First Easter?

History, Astronomy and the Prophet Daniel Provide the Date

The Crucifixion of Jesus Was Friday April 3, 33 AD

Jesus waited to reveal that he was God until his time had come.  While this had many purposes, one was to fulfill all Bible prophecy, including the date of his death.  The crucifixion of Jesus Christ, the Son of God, and his resurrection are the two most important events in human history.  Why is this so?  Because of Jesus’ death, every person has the opportunity for eternal salvation.  Without it no one can be saved.  The sin of mankind would require an atoning sacrifice.  No human could atone for mankind’s sin.  Only God himself could do this. 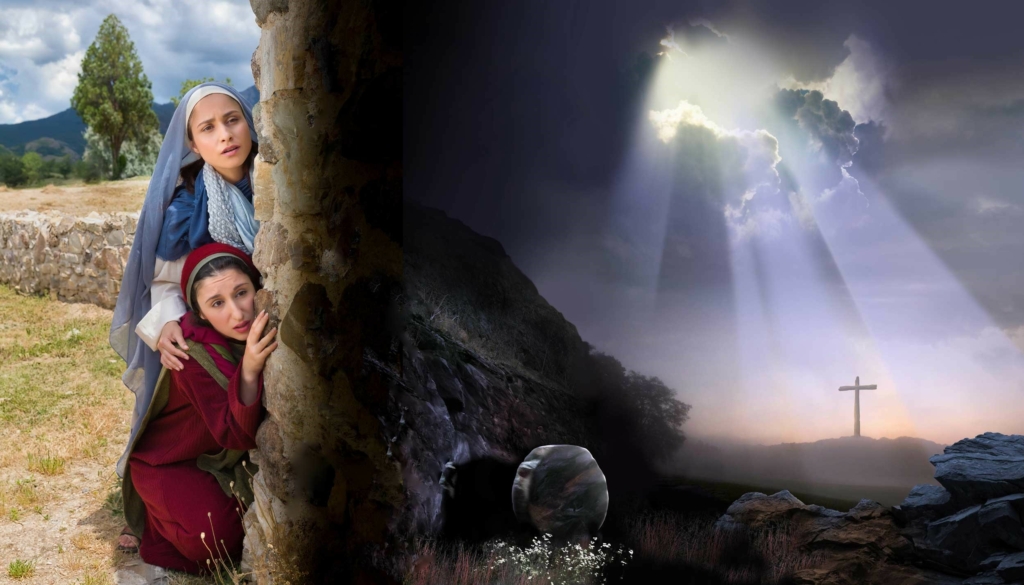 But when was this great event?  Of course, it is not necessary to know the precise date—all a believer must know is that it truly happened.  Yet the Bible gives us this date when we examine the Daniels’ prophecy.

There are many historical, astronomical, and calendar events connected with the crucifixion and resurrection of Jesus.  When combined only one crucifixion date perfectly fits all the criteria.  When we look at: 1) the ministry of John the Baptist, 2) the reign of Pontius Pilate, 3) the reign of Herod Antipas, 4) the writings of the historian Josephus, 5) the conversion of Paul, 6) the astronomical calculations of Isaac Newton, 7) the Jewish calendar, 8) the Roman calendar, 9) the Passover requirements, 10) the Jerusalem lunar eclipse and 11) the 69 sevens prophecy of Daniel, only the date of April 3, 33 AD perfectly fits all criteria to give the crucifixion date.

Jesus said more than once his time had not yet arrived.  Jesus waited for the right time to declare he was God.  This causes confusion to some, for example Muslims, who take text out of context.

Matthew 16:15-20 (NIV)
“But what about you?” he asked. “Who do you say I am?” Simon Peter answered, “You are the Messiah, the Son of the living God.” Jesus replied, “Blessed are you, Simon son of Jonah, for this was not revealed to you by flesh and blood, but by my Father in heaven.  And I tell you that you are Peter, and on this rock I will build my church, and the gates of Hades will not overcome it. I will give you the keys of the kingdom of heaven; whatever you bind on earth will be bound in heaven, and whatever you loose on earth will be loosed in heaven.”  Then he ordered his disciples not to tell anyone that he was the Messiah.

Muslims are taught Jesus was not God, was not crucified and did not rise from the dead.  With this false teaching, they do not have a path to God.  In the Koran, the Satanic spirit appearing to Mohammad gave a message that the crucifixion did not occur.  (Koran 4:157 And for their saying, “Indeed, we have killed the Messiah, Jesus, the son of Mary, the messenger of Allah .” And they did not kill him, nor did they crucify him; but another was made to resemble him to them. And indeed, those who differ over it are in doubt about it. They have no knowledge of it except the following of assumption. And they did not kill him, for certain.)

JESUS SAID: “DO NOT THINK THAT I HAVE COME TO ABOLISH THE LAW OR THE PROPHETS” and “MY TIME IS NOT YET HERE”

It can be confusing when we read Bible passages where Jesus did not come right out and say he was God.  (for example: Mark 10:18 “Why do you call me good? No one is good, except God alone.”)  Everything Jesus said was part of God’s plan.  Since Jesus is God, it was his plan, and Jesus knew the plan down to each minute.

These instances were early in his ministry, and his appointed time to reveal his divine nature too early to fulfill all prophecy.  The other times were at the time of his death when he bore the sin of the world.  (for example while on the cross: Matthew 27:46 “My God, My God, why hast thou forsaken me?”)

Why would Jesus wait to confirm he is God?  Jesus knew that as soon as he confirmed he was the Son of God the Pharisees would kill him.  So, his death date had to perfectly fulfill all prophecy of the prophets—including the precise date of his death given by the prophet Daniel (Daniel 9:25-26) some 550 years earlier.

Matthew 5:17-18  (NIV)
“Do not think that I have come to abolish the Law or the Prophets; I have not come to abolish them but to fulfill them.  For truly I tell you, until heaven and earth disappear, not the smallest letter, not the least stroke of a pen, will by any means disappear from the Law until everything is accomplished.”

John 7:6-9  (NIV)
Therefore Jesus told them, “My time is not yet here; for you any time will do.  The world cannot hate you, but it hates me because I testify that its works are evil.  You go to the festival. I am not going up to this festival, because my time has not yet fully come.”  After he had said this, he stayed in Galilee.

John 7:28-31  (NIV)
Then Jesus, still teaching in the temple courts, cried out, “Yes, you know me, and you know where I am from. I am not here on my own authority, but he who sent me is true. You do not know him,  but I know him because I am from him and he sent me.” At this they tried to seize him, but no one laid a hand on him, because his hour had not yet come.  Still, many in the crowd believed in him. They said, “When the Messiah comes, will he perform more signs than this man?”

Daniel 9:25-26  (NIV)
“Know and understand this: From the time the word goes out to restore and rebuild Jerusalem until the Anointed One, the ruler, comes, there will be seven ‘sevens,’ and sixty-two ‘sevens.’ It will be rebuilt with streets and a trench, but in times of trouble.  After the sixty-two ‘sevens,’ the Anointed One will be put to death and will have nothing. The people of the ruler who will come will destroy the city and the sanctuary.

The Book of Nehemiah gives us the starting date for the 69 sevens.  In the fifth century BC a Hebrew named Nehemiah, then cup bearer to the Med- Persian king Artaxerxes, wrote of the command to restore and rebuild Jerusalem:

Nehemiah 2:1-5 (NIV)
In the month of Nisan in the twentieth year of King Artaxerxes, when wine was brought for him, I took the wine and gave it to the king. I had not been sad in his presence before, so the king asked me, “Why does your face look so sad when you are not ill? This can be nothing but sadness of heart.”

I was very much afraid, but I said to the king, “May the king live forever! Why should my face not look sad when the city where my ancestors are buried lies in ruins, and its gates have been destroyed by fire?”

The king said to me, “What is it you want?” Then I prayed to the God of heaven, and I answered the king, “If it pleases the king and if your servant has found favor in his sight, let him send me to the city in Judah where my ancestors are buried so that I can rebuild it.”

Nehemiah requested that he be allowed to go back to Jerusalem and rebuild the city.  King Artaxerxes granted his wish on the spot and gave him official “letters” or documents for easy passage. This occurred, we are told in the month of Nisan, in the twentieth year of Artaxerxes Longimanus’ reign. Artaxerxes Longimanus ascended to the throne of the Medo-Persian empire in July 464 BC. The twentieth year of his reign would have begun in July 445 B.C.

The decree occurred approximately nine months later in the month of Nisan (March/April on our calendar). The exact date of the decree is March 5, 444 BC.

Therefore, Nisan 444 BC marks the starting point of the 7 and 62 sevens of Daniel.  Daniel says the 69 sevens (7 + 62) were to expire shortly before Christ’s death.  Hence the ending point for the 69th seven (69 x 7 years) is shortly before Christ’s death. To do this calculation correctly, we must first understand a Hebrew Old Testament prophetic year.  The Hebrew prophetic year had fewer days than the Roman year of 365.24 days. The Hebrew Old Testament year was 360 days.  This gives us the date of April 3, 33 AD.

The fact that the prophets understood a year as 360 days is well attested. God created the sun to mark the seasons and years. He made the moon to mark the days.  There are 354.37 days in a lunar year (of 12 moons/months), and 365.24 days in a solar year; together they average 360 days.  For a detailed analysis of the Old Testament prophetic years equaling 360 days–see the Appendix. 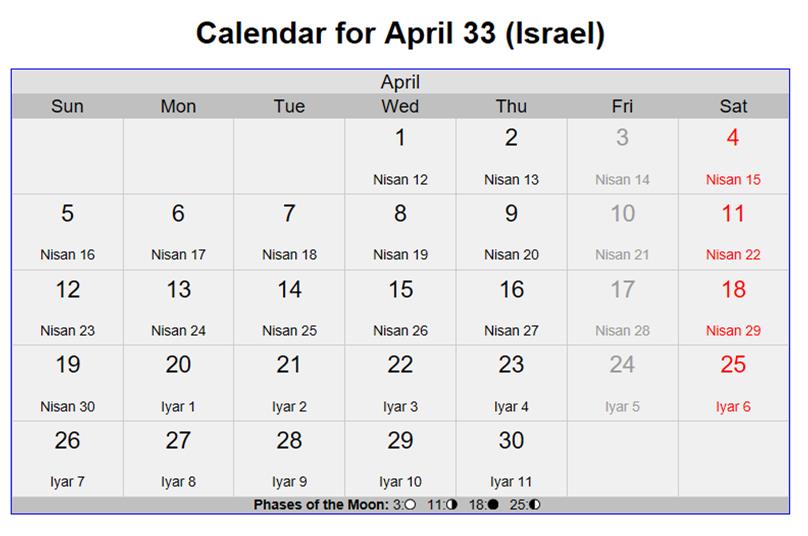