Ezekiel Prophecy Islamic Invasion is Near

Ezekiel Prophecy Islamic Invasion is Near

The New York Times Magazine has a very sober article (Fractured Lands: How the Arab World Came Apart) on the terrible mess today in the Islamic countries surrounding Israel.  It is worth reading all of it.  As you might expect the New York Times does not have a good explanation as to why this is occurring.  They just know something very unusual is happening.  But this is the hand of God.  Ezekiel told us about this 2600 years ago. 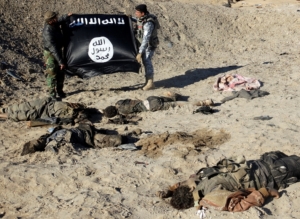 All the nations Ezekiel prophesied about are Islamic today and in the midst of numerous wars—actually 10 or more different wars today.  There are more people (> 65 million) displaced by war today than at any time in the history of the world—including the peak displacement during World War II in 1945.  The vast majority of the displaced people are from Islamic countries.

These are mostly the same countries Ezekiel described (chapters 38-39) as leading a failed invasion into Israel in the last days.  The Bible tells us these countries will invade Israel and they all are being reformed right in front of our eyes.  The next step is a strong leader (“Gog”) to pull them together.  It is most likely that Gog will come out of Turkey.

Ezekiel prophesied in chapter 37 that the Jews would return back to Israel in the latter days.  This was further prophesied in more detail in Revelation 11.  These prophecies have been fulfilled.

After the return prophecy, the Lord next revealed to Ezekiel in chapters 38-39 that an invasion of Israel led by many countries would occur after the Jews returned to Israel, had prospered and lived in peace. This invasion will be led by Gog, and Gog and his armies will be destroyed in Israel.

We also understand God’s purpose for both returning the Jews to Israel and the first Israel invasion victory is to show that God is Holy:

Ezekiel 37 (NIV)
27 “My dwelling place will be with them; I will be their God, and they will be my people. 28 Then the nations will know that I the Lord make Israel holy, when my sanctuary is among them forever.”

Ezekiel 38 (NIV)
21 “I will summon a sword against Gog on all my mountains, declares the Sovereign Lord. Every man’s sword will be against his brother. 22 I will execute judgment on him with plague and bloodshed; I will pour down torrents of rain, hailstones and burning sulfur on him and on his troops and on the many nations with him. 23 And so I will show my greatness and my holiness, and I will make myself known in the sight of many nations. Then they will know that I am the Lord.”

We are seeing Turkey become an Islamic republic almost overnight.  All of these events are part of what Ezekiel said would happen.  God will soon prove His Holiness.