The Final Two Wars for Israel Led by Gog

The Final Two Wars for Israel Led by Gog

In the end times there are two final wars in Israel that are often confused for the same conflict–but are most likely different.  They can be thought of more as an ongoing process.  Much like World War II was a continuation of unresolved issues left over from World War I. The Islamic leader is “Gog”.

Gog is killed in the first war, yet the world is “astonished” when the fatal wound seems healed.

The full Gog War 1 and Gog War 2 article is here.

The first war is with Gog as the leader and Persia plus other Islamic nations invasion of Israel as described in Ezekiel 38-39.  The final Gog war, which is ended only by the return of Christ, is described in Zechariah 12 and 14 and also in Revelation 16 and 20.  The second war enters into Jerusalem directly.  The first Gog war is after the rapture and somewhat near to the start of the seven year tribulation, and the second one is both during the tribulation and also ends the tribulation.  In both wars a leader called “Gog” is involved.  Yet Gog is killed in the first war.  These two wars can be called “Gog War 1” and “Gog War 2.”  They will be at least seven or more years apart.

There will be a time of peace between two wars so in that sense they are separate, but the problem should be thought of as an ongoing situation.  They will be at least seven or more years apart since Israel needs seven years to burn the Islamic weapons—and perhaps also build Ezekiel’s Temple.  With regards to the first Gog war, Ezekiel says nothing about an invasion of Jerusalem and in fact implies that Israel quickly defeats the invading Islamic armies with the help of God.  The second Gog war is even larger and far more destructive to Israel and Jerusalem.  Only the return of Christ saves Jerusalem in the second war.

The Islamic Man of Lawlessness will lead the first invasion.  “Gog” the chief prince of Meshek and Tubal is the Islamic Man of Lawlessness, and the “northern nations” include Turkey, Iraq and Syria.  Beth Togarmah is in modern Turkey today.  In Ezekiel 39 God makes clear that Gog is killed and buried in the first invasion.  In this first invasion the Islamic armies do not make their way to Jerusalem.  With God’s help they fall in the mountains of Israel before they can strike Jerusalem. 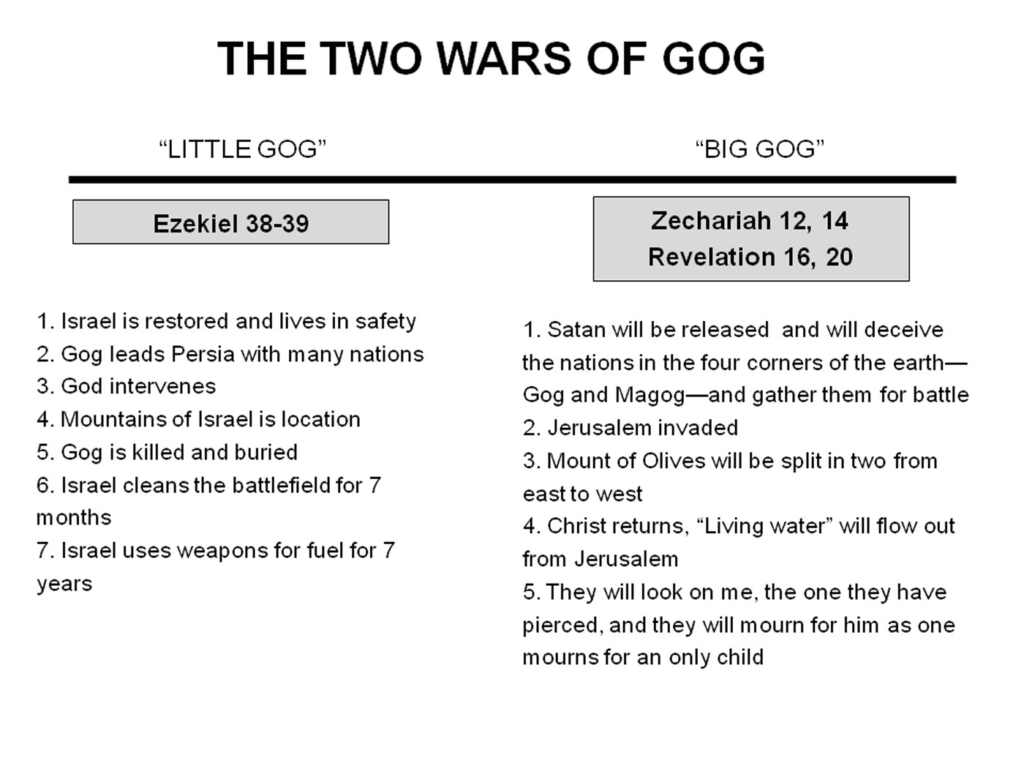 Islamic leaders expect the Mahdi to appear with a false Jesus at his side and kill all non-Muslims.  When Gog–the Islamic Messiah–is killed by Israel in the first invasion, the Muslim world will seek an ultimate revenge.  When the head of the beast reappears with the “fatal wound that was healed” as prophesied in Revelation 13: 3-4, a reincarnate (not resurrected since Satan has no power of resurrection) “Super Gog” will take his place, demand to be worshiped, and will appear to be “Allah” to the world and all Muslims.

All remaining people on earth will be astonished.  All Muslims will follow the command of Allah.

If the Islamic nations and armies are defeated soundly enough in the first Gog war, it is very possible Israel will have the power to rebuild the third Temple at the Temple Mount, razing both the Dome of the Rock and the Al-Aqsa Mosque.  They would only be able to do this following a severe Islamic defeat.  This defeat is temporary.

Many people are expecting a man to be the final leader, but the world will be astonished by what really happens. When Satan is reincarnate as “Allah”, (“the seemly fatal wound that was healed”, the post rapture world will be “astonished” and will directly worship Satan the dragon, and Beast) Satan (“Allah”, the Beast) will demand that all Muslims avenge killing of the Islamic Messiah (the “Mahdi”), the destruction of the Dome of the Rock, and Al-Aqsa Mosque.  All Muslims in the whole world will stream towards Jerusalem at his command in a billion or more person final war. This is when Christ returns!

Let us pray Muslims can find the truth of Jesus while there is still time.