“YOU ARE THE GOD WHO SEES ME”.

The Bible tells us of two separate accounts in the Book of Genesis of how an enslaved woman named Hagar meets the Angel of the Lord as she is wandering through a desert feeling hopeless. The angel—who is Jesus, the Son of God himself, appearing in an angelic form—provides the hope and help that Hagar needs both times.

Before Jesus appeared as a human in the New Testament, He appeared as the “Angel of the Lord” in the Old Testament.

Jesus saves Hagar and Ishmael.  That Jesus had compassion on Ishmael explains why the Apostle Paul was first sent to preach to Gospel in Arabia. These people were the descendants of Ishmael. (Galatians 1:15-17) 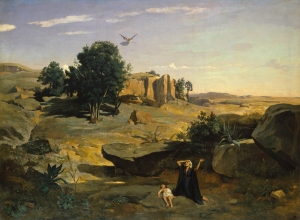 The Bible gives no account of any churches established in Arabia by Paul. The descendants of Ishmael apparently completely rejected the preaching of Paul.

Only after this rejection did Jesus allow Baal to leave the Abyss (the man of lawlessness) and appear in Arabia to deceive Mohammad. (2 Thessalonians 2:8-12) This was a punishment for rejecting Jesus.

Genesis 16:7-14 (NIV)
7 The angel of the Lord found Hagar near a spring in the desert; it was the spring that is beside the road to Shur. 8 And he said, “Hagar, slave of Sarai, where have you come from, and where are you going?” “I’m running away from my mistress Sarai,” she answered.
9 Then the angel of the Lord told her, “Go back to your mistress and submit to her.” 10 The angel added, “I will increase your descendants so much that they will be too numerous to count.”
11 The angel of the Lord also said to her: “You are now pregnant and you will give birth to a son. You shall name him Ishmael, for the Lord has heard of your misery. 12 He will be a wild donkey of a man; his hand will be against everyone and everyone’s hand against him, and he will live in hostility toward all his brothers.”
13 She gave this name to the Lord who spoke to her: “You are the God who sees me,” for she said, “I have now seen the One who sees me.” 14 That is why the well was called Beer Lahai Roi; it is still there, between Kadesh and Bered.

Genesis 21:14-20 (NIV)
14 Early the next morning Abraham took some food and a skin of water and gave them to Hagar. He set them on her shoulders and then sent her off with the boy. She went on her way and wandered in the Desert of Beersheba.
15 When the water in the skin was gone, she put the boy under one of the bushes. 16 Then she went off and sat down about a bowshot away, for she thought, “I cannot watch the boy die.” And as she sat there, she began to sob.
17 God heard the boy crying, and the angel of God called to Hagar from heaven and said to her, “What is the matter, Hagar? Do not be afraid; God has heard the boy crying as he lies there. 18 Lift the boy up and take him by the hand, for I will make him into a great nation.”
19 Then God opened her eyes and she saw a well of water. So she went and filled the skin with water and gave the boy a drink.
20 God was with the boy as he grew up. He lived in the desert and became an archer. 21 While he was living in the Desert of Paran, his mother got a wife for him from Egypt.

The fact that Ishmael was an archer (Genesis 21:20) is very important for prophecy. The Bible strongly warns us about Four Horsemen that attempt to fight the true God. The leader and first horseman is on a white horse, carries a bow, wears a crown, ranks the highest of the four and conquers many. The False Prophet Mohammad is a descendant of Ishmael, and this explains why the first rider on the white horse also carries a bow. The first rider is Mohammad.

Revelation 6:1-2 (NIV)
I watched as the Lamb opened the first of the seven seals. Then I heard one of the four living creatures say in a voice like thunder, “Come!” I looked, and there before me was a white horse! Its rider held a bow, and he was given a crown, and he rode out as a conqueror bent on conquest.

This highest-ranking rider leads a vast spiritual war against the truth of Jesus, and conquers many with his false doctrine. False doctrine comes from a False Prophet. The first rider on the white horse claims to speak for God, but instead speaks for Satan. 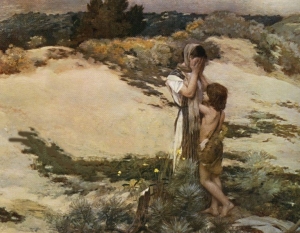 After the Gospel was first offered to the Jews, Jesus sent Paul to preach to the Gentiles in far-away places such as Arabia.  Arabia is the land of Ishmael’s descendants.

Galatians 1:15-17 (NIV)
“But when God, who set me apart from my mother’s womb and called me by his grace, was pleased to reveal his Son in me so that I might preach him among the Gentiles, my immediate response was not to consult any human being. I did not go up to Jerusalem to see those who were apostles before I was, but I went into Arabia. Later I returned to Damascus.”

They refused to believe the truth given by Paul.  Paul had little success, apparently establish no churches there and wrote no letters to them. After returning from Arabia, Paul explains why God is sending a strong delusion in the latter days:

This was a punishment for rejecting the Gospel. Note how Paul writes in the past tense: “they refused to love the truth and so be saved”, and “who have not believed the truth.”

2 Thessalonians 2:8-12 (NIV)
And then the lawless one will be revealed, whom the Lord Jesus will overthrow with the breath of his mouth and destroy by the splendor of his coming. The coming of the lawless one will be in accordance with how Satan works. He will use all sorts of displays of power through signs and wonders that serve the lie, and all the ways that wickedness deceives those who are perishing. They perish because they refused to love the truth and so be saved. For this reason God sends them a powerful delusion so that they will believe the lie and so that all will be condemned who have not believed the truth but have delighted in wickedness.

Jesus saves Hagar and Ishmael in Genesis 16 and 21. Jesus loved and protected Ishmael and Hagar.  He made Ishmael into a great nation. Jesus first sent Paul to preach the Gospel in Arabia to the descendants of Ishmael. Only when they rejected the Gospel, did Jesus allow Baal to deceive Mohammad as a “powerful delusion.”