Muslims Being Saved Is More Proof of the Last Days.

We can see living proof that Jesus Christ saves Elamites today.  If you are a Muslim Elamite from Iran, know that your salvation was seen by the prophet Jeremiah some 2600 years ago!!

The prophecies of the Elamites are given in the last six verses of Jeremiah chapter 49.

“But it will come about in the last days
That I will restore the fortunes of Elam,”
Declares the Lord.

Listed below is a summary of Elamite history. 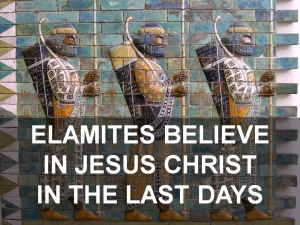 Jesus gives living water not bitter water.  The Qur’an gives only bitter water to one third of the world.  Islam’s bitter water kills many.  The bitter water is the false doctrine about Jesus in the Qur’an.

The third angel sounded his trumpet, and a great star, blazing like a torch, fell from the sky on a third of the rivers and on the springs of water, the name of the star is Wormwood. A third of the waters turned bitter, and many people died from the waters that had become bitter.

John 7:37-39 (NIV)
On the last and greatest day of the festival, Jesus stood and said in a loud voice, “Let anyone who is thirsty come to me and drink. Whoever believes in me, as Scripture has said, rivers of living water will flow from within them.” By this he meant the Spirit, whom those who believed in him were later to receive. Up to that time the Spirit had not been given, since Jesus had not yet been glorified.