Islamic Terrorism Denies Jesus Is the Son of God

Islamic Terrorism Denies Jesus Is the Son of God

Islamic Terrorism Denies Jesus is the Son of God

Islamic terrorism denies Jesus is the Son of God.  In Islam, the doctrine of “Tawhid” fights for the oneness of Allah and against Jesus the true God.  Learn the truth of Jesus.  Jesus is returning soon.

The first word that should come to mind when thinking of Islam is not Terror, but rather Tawhid.  America will never win the “War on Terror.”  This is because Islamic Terrorism is only the symptom, not the disease.  Tawhid is the disease.  Jihadi terrorists seek to impose Tawhid on unbelievers in the Oneness of Allah.

Tawhid is not defeated by armies, but only by the soon return of Jesus Christ.

Gospel of John in English and Arabic is here:

Worldwide surveys show something like 10-30% of Muslims accept terrorism to varying degrees, thus most do not.  But 100% of Muslims accept Tawhid, and because of this 100% of their souls are lost.  They will be forever separated from God.  Only by accepting Jesus Christ the risen Messiah can they enter through the narrow door to God and eternal life.  The sad fact is no Muslim knows if they are saved, and with Jesus Christ they can be 100% certain they are.

Tawhid (also transliterated as Tawheed and Towheed), means the oneness of the Islamic Allah.  (We are talking here only about the Islamic Allah of the Koran, not the generic Arabic word “Allah” for God.)  The Islamic Allah is not the Biblical Jehovah, Elohim, YHWH, Adonai, or Jesus, but rather Satan the fallen morning star who wishes to be God that Isaiah wrote about.

12 How you have fallen from heaven, morning star, son of the dawn! You have been cast down to the earth, you who once laid low the nations!

13 You said in your heart, “I will ascend to the heavens; I will raise my throne above the stars of God;”

14 “I will ascend above the tops of the clouds; I will make myself like the Most High.”

Tawhid “Oneness” excludes Jesus as God and the risen Messiah, and also excludes the Holy Spirit.  This is what Satan wanted Mohammad to believe in 610  when he appeared as the “Angel Gabriel” and explains why the Islamic Allah fights the Trinity with such vigor.

Koran 5:73  “They do blaspheme Allah who say: Allah is one of three in a Trinity, for there is no God but Allah….verily a grievous penalty will befall the blasphemers among them.”

Koran  4:171 People of the Book, do not go to excess in your religion, and do not say anything about Allah except the truth: the Messiah, Jesus, son of Mary, was nothing more than a messenger of God, His word, directed to Mary, a spirit from Him.  So believe in Allah and His messengers and do not speak of a ‘Trinity’—stop, that is better for you—Allah is only one God.

Tawhid is the indivisible oneness concept of monotheism in Islam.  This is what Osama Bin Laden meant when he wrote “we want the Unification of Allah; freedom from associating partners with Him” to explain the 9/11 attacks. 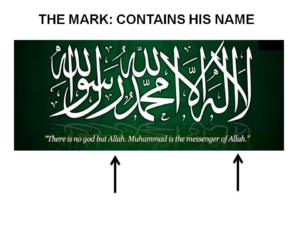 Tawhid constitutes the foremost article of the Muslim profession of faith. The first part of the Shahada (the Islamic mark of the beast and also contains the name of the beast) is the declaration of belief in the oneness of Allah. [Thus denying Jesus Christ and the Holy Spirit.]

Mohammad declared the Shahada mark should be the last thing a person says when dying.  With their last breath then they are forever separated from Jesus Christ and salvation.

Muslims have been deceived into believing that the entirety of the Islamic teaching rests on the false principle of Tawhid.

Tawhid will only be defeated by the soon return of Christ.  Bible prophecy proves this.

Although there are dozens and dozens of Bible verses in the New Testament that prove Jesus Christ is God and will return, Old Testament prophecy proves it as well.  Psalm 110 and Zechariah 12 are crystal clear!   In each case Jehovah is talking to Jesus, and both are the same God.

The LORD says to my lord: “Sit at my right hand until I make your enemies a footstool for your feet.”

[Hebrew:  Elohim says to Adonai: “Sit at my right hand until I make your enemies a footstool for your feet.”]

“They will look on me, the one they have pierced, and they will mourn for him as one mourns for an only child, and grieve bitterly for him as one grieves for a firstborn son.”

All of these events are part of what Jesus said would happen.  God will soon prove His Holiness.
Lesson 1: Inviting Muslims to Know the Love of Christ