ZAKIR NAIK PERSUADES A CHRISTIAN TO TAKE THE MARK–THE SHAHADA

The Bible is the Word of God, is without error, and tells us of God’s plan of redemption through Jesus Christ.  In the Bible, Jesus warns us of false teaching and the false Islamic prophet. Jesus warned to never commit Holy Spirit blasphemy.  By denying the Holy Spirit is God, it is blasphemy.

Listen to the words of Jesus!  Jesus is the only way and He is returning soon.

We can use the Bible to understand prophecy warnings about Islam. We can see what Jesus warned us about in a Zakir Naik video.

We can see Naik in the video blaspheming the Holy Spirit, denying Jesus is the Son of God, and a Christian woman saying the Shahada as she converts to Islam. The Shahada is the mark we are warned about.

Zakir Naik is an Indian Islamic preacher, and the founder and president of the Islamic Research Foundation (IRF).  He is also the founder of the Peace TV channel through which he reaches 200 million viewers.

Pray that Naik repents and accepts Jesus as his Lord and Savior.

Before becoming a public speaker, he trained as a physician.  Sadly, Naik has caused many tens of thousands of people to lose their eternal salvation through his Islamic false teaching.

The true answers from the Bible are here–they refute what Naik says completely: 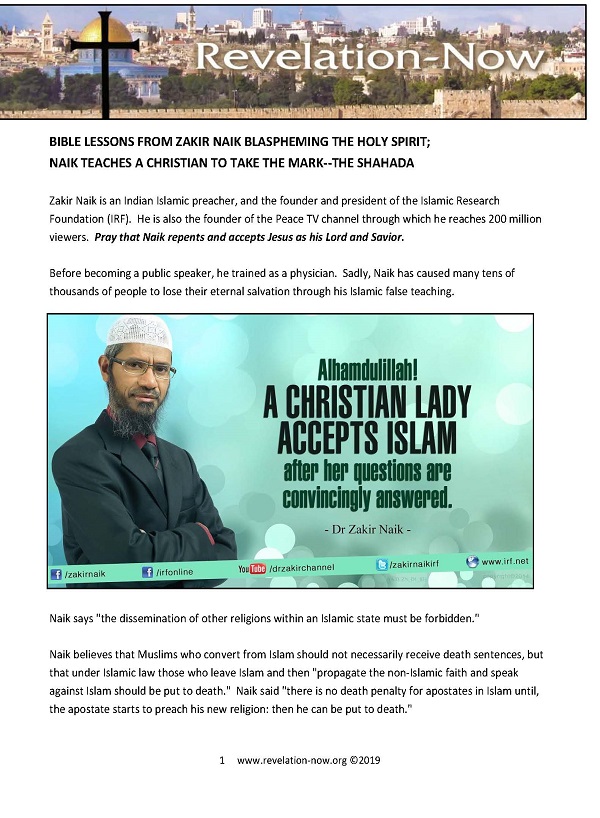 Zakir Naik makes many blasphemous and incorrect statements in this video.  He is deceiving Christians and Muslims so that they do not understand the truth of the Bible.  Naik causes their souls to be lost.  Christians must tell the truth of the Bible by using Bible Scriptures.  The Bible truth is more than sufficient to correct every lie from Naik.  Nothing else is needed but Bible Scriptures.  Jesus is sufficient.

The false or blasphemous statements are listed below.  The Bible proves Naik is lying. 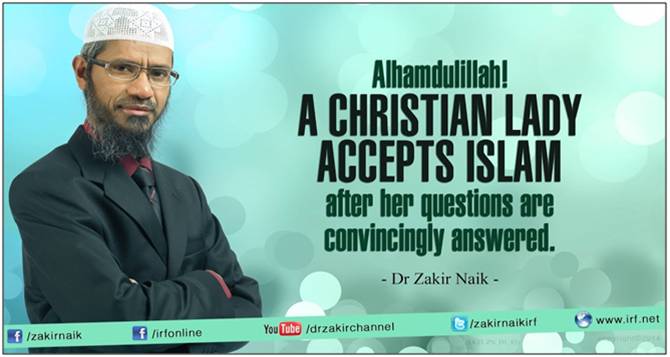