Allah Takes Away the Lord’s Supper

Home/Bible Prophecy, Lessons, Qur’an in Prophecy/Allah Takes Away the Lord’s Supper
Previous Next

Allah Takes Away the Lord’s Supper

The Beast Tries to Take Control of the Lord’s Table

The Bible Says Only One Sacrifice Matters

The Sacrifice of Jesus Christ Is Daniel’s Oblation

Allah takes away the Lord’s Supper.  In the middle of the seven he caused the oblation and sacrifice to cease.  Listen to Jesus.

Jesus tells us, through the prophet Daniel, (Daniel 9:27) that the demonic ruler, the prince who is to come, will “cause the sacrifice and the oblation to cease.”  This is not a temple sacrifice of grain or animals.  The only sacrifice that matters is the one from Jesus Christ.  The beast Baal, Allah of the Qur’an, tries to stop the remembrance of the atoning sacrifice of Jesus Christ.

Allah devotes an entire chapter (chapter 5 “The Table”) to taking control of the Lord’s Table.  Allah converts the true story into his false story.  Allah then threated the worst punishment ever for anyone who believes differently!  Allah is Beelzebub, the “prince of demons.”  He is the ruler that came out of the Abyss.  The beast of Revelation. Islam appeared in the middle of the seven.

“And he shall confirm the covenant with many for one week: and
in the midst of the week he shall cause the sacrifice and the oblation to cease.”
Daniel 9:27 (KJV)

Oblation:  A cereal offering presented to God (Leviticus 2:4) and denounced by prophets (Isaiah 1:13) when unaccompanied by social righteousness.  In Christian usage, the word was applied to Christ who offered himself in sacrifice.  Later the word was used of the Eucharist as a commemoration of Christ’s self‐offering, and to the elements of bread and wine used in the service.

That Jesus is the perfect sacrifice is made clear in Hebrews 10:5-7.

Hebrews 10:5-7 (NIV)
Therefore, when Christ came into the world, he said: “Sacrifice and offering you did not desire, but a body you prepared for me; with burnt offerings and sin offerings you were not pleased. Then I said, ‘Here I am—it is written about me in the scroll—I have come to do your will, my God.’” 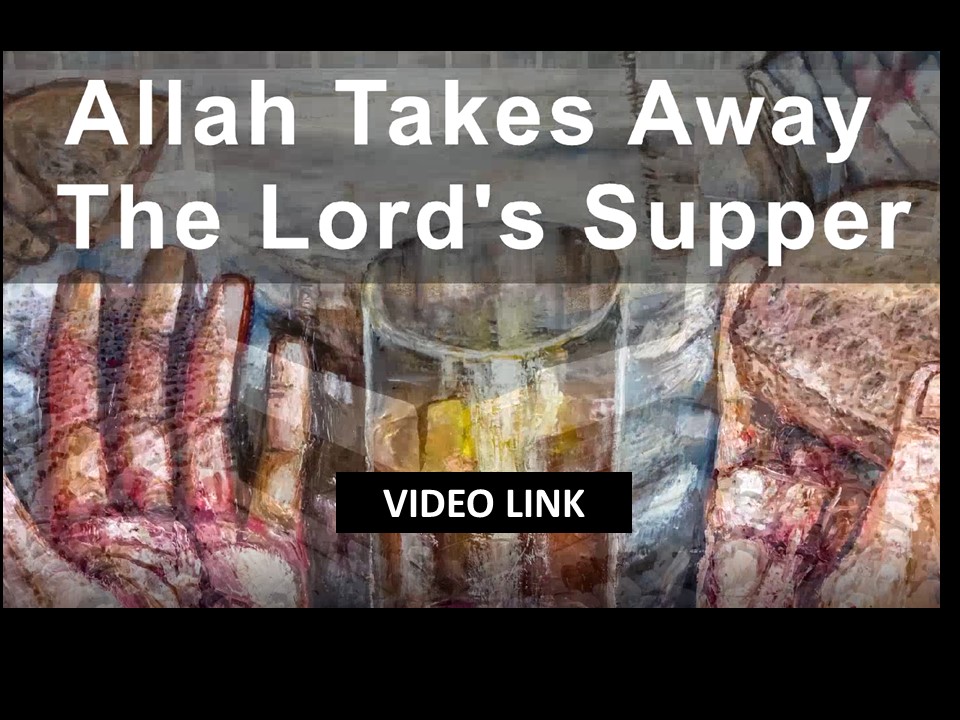 Allah takes away the Lord’s Supper.

Qur’an 5:114
Jesus son of Mary said, “O Allah, our Lord, send down for us a table from heaven, to be a festival for us, for the first of us, and the last of us, and a sign from You; and provide for us; You are the Best of providers.”

Qur’an 5:115
Allah said, “I will send it down to you. But whoever among you disbelieves thereafter, I will punish him with a punishment the like of which I never punish any other being.”

To understand the meaning of chapter 5 in the Qur’an, we first must know the true story of the perfect sacrifice, the Lord’s Supper, from the Bible. The overall narrative that is shared in all Gospel accounts that leads to the Last Supper is that after the triumphal entry into Jerusalem early in the week, and encounters with various people and the Jewish elders, Jesus and his disciples share a meal towards the end of the week. After the meal, Jesus is betrayed, arrested, tried, and then crucified.

Matthew 26:26-29 (NIV)
While they were eating, Jesus took bread, and when he had given thanks, he broke it and gave it to his disciples, saying, “Take and eat; t his is my body.”  Then he took a cup, and when he had given thanks, he gave it to them, saying, “Drink from it, all of you.  This is my blood of the covenant, which is poured out for many for the forgiveness of sins.  I tell you, I will not drink from this fruit of the vine from now on until that day when I drink it new with you in my Father’s kingdom.”