Home/Book of Revelation, Lessons, Qur’an in Prophecy/Jesus Warns Against Taliban
Previous Next

When Does Jesus Say Everyone Will Be Forced to Take His Mark?

Listen to Jesus.  Jesus warns against Taliban and taking the mark of Allah, called the Shahada.  This mark is the flag carried everywhere by the Taliban.  The Bible calls is the “mark of the beast.”  Today the war rages between the Christ and the antichrist.  Jesus warns against Taliban because they worship the antichrist spirit.  Yet the world and even most Christians are asleep.  Many are looking for a human antichrist, even though the Bible says it is a spirit (1 John 4:3  “Every spirit that does not confess Jesus is not from God. This is the spirit of the antichrist, which you heard was coming and now is in the world already”).  The spirit of the antichrist was already in the world at the time of the Apostles.

Most of the world, including more than half of all Christians, leaders such the Pope, American presidents, and others believe the Allah of the Qur’an is the true God of Abraham, Isaac and Jacob.  The Allah of the Qur’an is not the true God.  This is the antichrist–the powerful spirit that opposes Jesus as the Son of God and opposes his atoning sacrifice that is the only path to the Father. 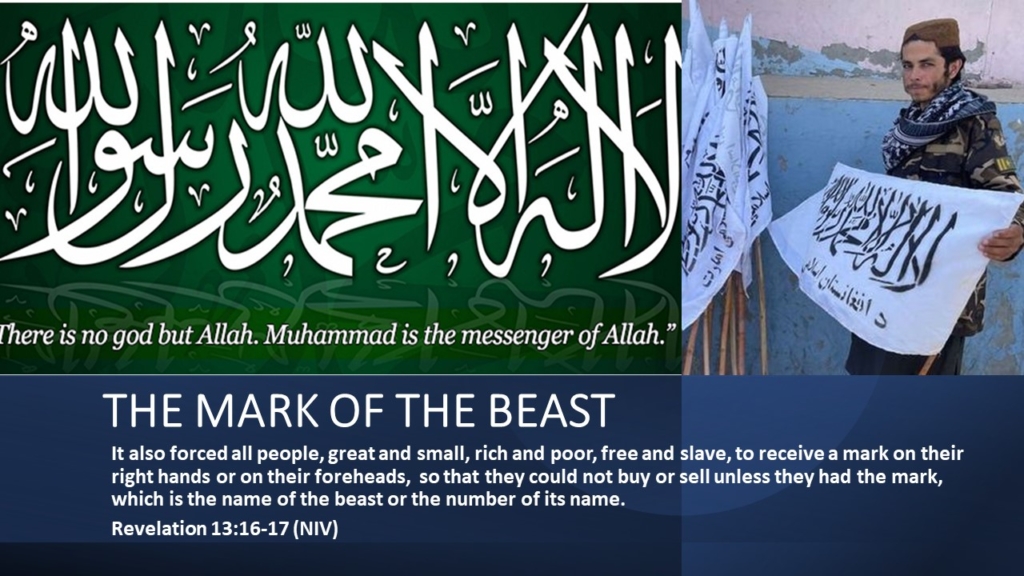 Jesus warns against Taliban because their antichrist spirit (“Allah” of the Qur’an) is not God, but a spirit of extreme power (Baal) that has always desired to be like the most high.

The Taliban carry everywhere the mark of this antichrist–the Shahada of allegiance to Allah and his false prophet.  Today in Afghanistan we a see a picture into the future of what all the world will look like when all of the sea is dead.  That is, the Bible says all of the spiritual world is “dead” in the eyes of the true God because they are aligned with the beast.

The Shahada contains the Allah’s name.  Remember the Bible tells us the “mark contains its name” (Revelation 13:16-17) and we know the Shahada was finalized in the year 666.

The mark of the beast in Revelation prophecy is not a microchip in a COVID vaccine from Bill Gates.  That is a deception.  To understand the spiritual importance of the image and the mark, we must understand they are an abomination to the true God, and yet most important to those that worship a false god.  In other words, they are important to both Christ and the antichrist spirit.

The Islamic Shahada (the mark) and daily prayer and pilgrimage to the Kaaba (the image) are key worship parts of the Five Pillars of Islam. This is the meaning of the mark and image Jesus warned about in Revelation.

Jesus warns against Taliban some 550 years before the spirit appeared to Mohammad with a false story about Jesus.  This spirit is the “prince who is to come” and who also “takes away the sacrifice” (Daniel 9:26-27).  This spirit said “I will make myself like the most high” (Isaiah 14:13-15). 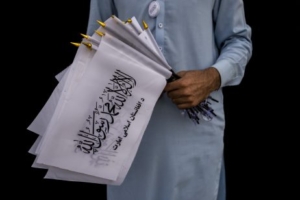 TALIBAN STREET VENDERS MUST SELL THE MARK OF THE DECEIVING SPIRIT

Who is the spirit in Isaiah 14 that wants to be like the most high?  Many people think the demonic spirit referred to in Isaiah 14:13-15 is Satan.  But God clearly says in Isaiah 14 that this spirit was “brought down to the realm of the dead, to the depths of the pit.”  Satan has not yet been not brought down to the pit, the Abyss (Satan will be later–see Revelation 20:1-3).  The beast of Revelation, Baal, was sent into the pit and later came out of the pit–the Abyss. (Revelation 17:8)  This is the “fatal wound” that was healed.

Isaiah 14:13-15 (NIV)
13 You said in your heart, “I will ascend to the heavens; I will raise my throne above the stars of God;
I will sit enthroned on the mount of assembly, on the utmost heights of Mount Zaphon.
14 I will ascend above the tops of the clouds; I will make myself like the Most High.”
15 But you are brought down to the realm of the dead, to the depths of the pit.

Revelation tells us the false prophet (Mohammad) who set up this Kaaba image in the house of Allah and the Shahada mark will be thrown into the lake of fire when facing God’s judgment.

TODAY ONLY ONE THIRD OF THE SEA IS “DEAD”

8 The second angel sounded his trumpet, and something like a huge mountain, all ablaze, was thrown into the sea. A third of the sea turned into blood, 9 a third of the living creatures in the sea died, and a third of the ships were destroyed.

Jeremiah 51:25 (NIV)
I am against you, you destroying mountain, you who destroy the whole earth,” declares the LORD. “I will stretch out my hand against you, roll you off the cliffs, and make you a burned-out mountain.”

We see the extreme power of the dragon and beast in the world today.  Yet only one third of angels are helping the two demonic leaders.  What happens (after the rapture of believers) when all the angels of light are withdrawn (Revelation 16:3-6) on the Day of the Lord and the entire sea is “dead?” 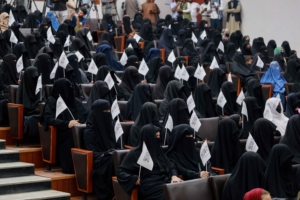 Revelation tells us the sea will give up its dead (“the sea gave up the dead that were in it”), when the Great White Thone judgement occurs before the Lamb of God.  Here Jesus will judge all of those who rebelled, including both humans and fallen angels, those that “died” in the sea.

We know from Psalm 110 the enemies of Jesus which reside in the spiritual realm, the sea, will be nothing more than a footstool for his feet.

Psalm 110:1-3 (NIV)
1 The Lord says to my lord: “Sit at my right hand until I make your enemies a footstool for your feet.” 2 The Lord will extend your mighty scepter from Zion, saying, “Rule in the midst of your enemies!” 3 Your troops will be willing on your day of battle. Arrayed in holy splendor, your young men will come to you like dew from the morning’s womb.

Paul tells us in Philippians 2:9-11 that every knee, including those “under the earth”, will bow to Jesus.

Philippians 2:9-11 (NIV)
9 Therefore God exalted him to the highest place and gave him the name that is above every name, 10 that at the name of Jesus every knee should bow, in heaven and on earth and under the earth,11 and every tongue acknowledge that Jesus Christ is Lord, to the glory of God the Father.

WHAT HAPPENS WHEN THE ENTIRE SEA IS “DEAD”
ON THE DAY OF THE LORD?

We know that after the rapture when Jesus harvests believers from the earth (Revelation 14:14-16), things will be much different for those left.  After this, the bowl judgements in Revelation 16 will be poured out on those who are left.  Most importantly, there will be no spiritual forces to protect at that time, as the entire sea is “dead.”

Revelation 14:14-16 (NIV)
14 I looked, and there before me was a white cloud, and seated on the cloud was one like a son of man with a crown of gold on his head and a sharp sickle in his hand. 15 Then another angel came out of the temple and called in a loud voice to him who was sitting on the cloud, “Take your sickle and reap, because the time to reap has come, for the harvest of the earth is ripe.” 16 So he who was seated on the cloud swung his sickle over the earth, and the earth was harvested.

We learn in Revelation 16:3 the most frightening fact–that at that time the entire sea is “dead”, meaning every angel that was obedient to Jesus Christ has been withdrawn.  Only “dead” angels remain.  In addition, Revelation 16:4 next tells us the rivers and springs (only Jesus gives “living water”) are now polluted and like “blood.”  This means the only spiritual water is the “bitter water” of the Qur’an.  Truth has been withdrawn as well.

Listen carefully to what Revelation 8:10-11 says about bitter waters.

Revelation 8:10-11 (NIV)
10 The third angel sounded his trumpet, and a great star, blazing like a torch, fell from the sky on a third of the rivers and on the springs of water— 11 the name of the star is Wormwood.  A third of the waters turned bitter, and many people died from the waters that had become bitter.

Note that in Islam, “Sharia” means “the path to water”, but it is only a path to bitter waters, not living waters.

Revelation 16:3-6 (NIV)
3 The second angel poured out his bowl on the sea, and it turned into blood like that of a dead person, and every living thing in the sea died. 4 The third angel poured out his bowl on the rivers and springs of water, and they became blood. 5 Then I heard the angel in charge of the waters say: “You are just in these judgments, O Holy One, you who are and who were;
6 for they have shed the blood of your holy people and your prophets, and you have given them blood to drink as they deserve.”

Once the sea is dead, the beast has full control.  No angels oppose him.  It is literally hell on earth.  Everyone will worship the beast and pray its Kaaba image, take the Shahada mark, or be killed. The horrific life in Afghanistan today will be life everywhere in the world for those remaining.

Revelation 13:8
8 All inhabitants of the earth will worship the beast—all whose names have not been written in the Lamb’s book of life, the Lamb who was slain from the creation of the world.

Revelation 13:15 (NIV)
15 The second beast was given power to give breath to the image of the first beast, so that the image could speak and cause all who refused to worship the image to be killed.

Revelation 13:16-17 (NIV)
16 It also forced all people, great and small, rich and poor, free and slave, to receive a mark on their right hands or on their foreheads, 17 so that they could not buy or sell unless they had the mark, which is the name of the beast or the number of its name.

JESUS TELLS US HOW TO IDENTIFY THE FOUR HORSEMEN OF REVELATION

Jesus said a false Revelation would come into the world.  Jesus said this some 550 years before the Qur’an was given to Mohammad.

Revelation 22:18 (NIV)
I warn everyone who hears the words of the prophecy of this scroll: If anyone adds anything to them, God will add to that person the plagues described in this scroll.

Revelation 22:19 (NIV)
And if anyone takes words away from this scroll of prophecy, God will take away from that person any share in the tree of life and in the Holy City, which are described in this scroll.

Jesus is returning soon.  The Book of Revelation is directly from Jesus Christ.  It is the most important book in the Bible for the world today.

The truth is Jesus is the Son of God, died for our sins, and is the only path to the Father and eternal life.

Jesus is returning soon.  Put your trust in Jesus Christ.  His words are always true.

The Old Testament, written hundreds of years before Jesus’ birth, contains at least 351 prophecies that Jesus fulfilled through His life, death and resurrection.  Mathematically speaking, the odds are staggering of anyone fulfilling a small amount of prophecy.  Fulfilling just 8 is impossible!

Jesus gives seven sure signs you are living in the last days.

THE TRUTH OF JESUS FOR MUSLIMS